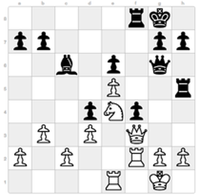 When Cumnor 1 last pitted itself against Wantage 1 in a chess match, we pulled off an unexpected victory.

So, it was with fingers crossed for a repeat performance that the Cumnor 1 team again made the journey to Wantage 1 for an away game.

Well, we always knew it was going to be an uphill struggle against a strong Wantage team, with their players outgunning ours with higher grades on every board – and, sadly, that’s borne out by the result.

Liam Glenn (140) started well as Black, and gained a past pawn on d3 early on in the middle game. However, his opponent quickly countered and he lost an exchange – Bishop for Rook. Later analysis revealed that this wasn’t as bad as first imagined, and Liam managed to gain a better pawn structure that allowed him to queen his extra pawn. Well done Liam!

A solid game was played by Mark Sayers (134), who gained a strong initiative in the middle game. Mark played a tactical sequence with a strong attack on his opponent’s King, but missed an opportunity to gain a winning position. Unfortunately, he fell behind on time and this eventually proved to be his downfall as there was just five minutes left as the game entered the end game.

Pako Alvarez (114) “fought like a lion”, but sadly it wasn’t enough on this occasion. Despite winning an extra pawn with his Queen’s Gambit opening, the situation changed rapidly and Pako found himself under permanent attack. Pako felt forced to exchange his king’s rook for his opponent’s knight. After that, his Wantage opponent mopped up the board by exchanging pieces and winning material.

Most chuffed of the Cumnor players on the night was Graham Cluley (113), on board six, who claims he played an opening he’d never tried in a match before – the Dutch Stonewall.

Almost certainly rapidly leaving the normal book line, Graham managed to pin his opponent’s knight and increase pressure against his opponent’s king side. However, the noose wasn’t tight enough, and white was able to swap his Queen for a black rook and bishop. This proved to be a sensible exchange for White, who had mating chances.

Ultimately, however, the combination of Graham’s Queen versus white’s knight and rook proved too powerful, allowing him to mop up white’s pawns, push his own and force a win.

Thanks to everyone who played.