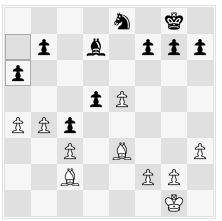 But, hold the champagne. Because due to the the handicap system used in the cup competition, we won’t progress to the next round.

The match, held on Tuesday night on Wantage’s home turf, started in confusion as Cumnor team captain Liam Glenn somehow managed to arrange for seven Cumnor players to turn up to play on the six boards!

Thankfully Wantage’s George Spalding (131) allowed Liam to sub himself out of the match and put junior player Daniel Varney (133) on to board two – thus saving both Daniel and his father Andrew a wasted journey.

Gareth Stevens (149) quickly entered an endgame with his two bishops versus his opponent’s bishop and knight, and went on to pull out another win.

You can play through his game, and see his notes, below:

Daniel, playing on board two, didn’t fair too well in the opening but then put up a very good fight to pull it back. Unfortunately, it wasn’t enough to take anything from the game.

Francisco “Pako” Alvarez (114) was playing his last game for Cumnor before he starts his Central American adventure. Pako found himself four pawns down in the endgame, but created a storming kingside attack, which would have lead to him queening a pawn if his opponent hadn’t resigned.

Steve Bennett (114) had a very drawn game early on against Ray Cordon (103), with little else to add to that.

There was a win and a loss on the bottom boards with Robert Steel (87) winning his game and Richard Harrop (57) losing.

Robert must be enjoying playing at the moment – after all, this is the second win he has had in a week against the Wantage 2 team.

Being knocked out of the tournament isn’t the most disastrous result as we would have to play top division team Cowley 1 in the next round.

It also allows us to concentrate on our league games. Next match for Cumnor 1? Witney 2 on Halloween!