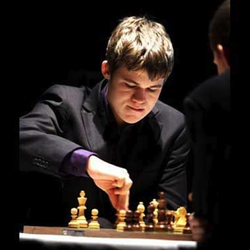 Yes, that’s right – no Eastern Europeans are up for the champ title this time around. How novel is that? :)

Carlsen drew white for the opening game, which ended fairly quickly in a draw by repetition after 16 moves.

Hardly the thrill that any of us were hoping for.

If you want to follow the games, you don’t have to be India of course. You can watch the games unfold online via a variety of sources.

Here are some choices:

Separately, here’s an interesting article that argues that even though Magnus Carlsen is the world’s best chess player, he shouldn’t be the world champion.

If you have a view, or a preferred way to follow the World Chess Championship, leave a comment below.