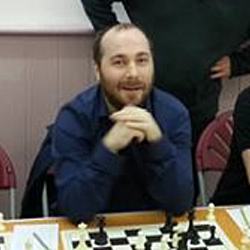 Congratulations to Cumnor Chess Club’s very own Gareth Stevens, who managed to cause a major upset last week by beating a grandmaster.

That would be a brilliant result in itself, but to make his victory over Peter Wells GM in a simultaneous demonstration even more glorious – Gareth was playing with the black pieces!

Gareth’s final move is wonderful. White cannot recapture the rook, because he will be putting himself in check. Although Black’s Queen could be taken by white, that’s not frightening to Black who is threatening to move his knight to g3, with a devastating checkmate.

Well done to Gareth for his brilliant and stylish game.