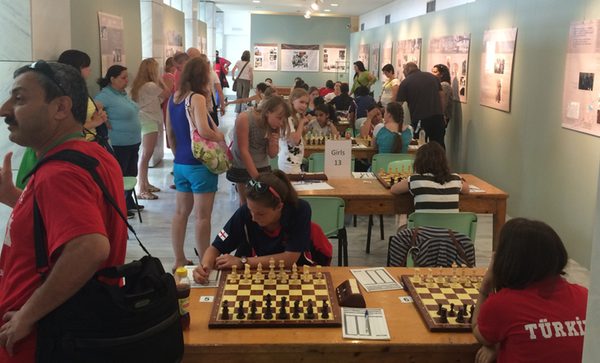 The tournament received more entrants than was anticipated, so has been split over two venues.

The sections that involve the Cumnor and Witney girls (U13 girls and U15 girls) are held in the more picturesque of the two, the local archaeological museum.

In the first round all 3 girls played in a rather stuffy room on the first floor, but for the second round Zoe was playing in the main area, while the U13s and lower U15 boards were moved to an airier upstairs mezzanine. The three Oxfordshire chess parents have been running a rota system to wait outside the venue for our children to finish. Today the rota for the first 3 shifts was Andrew, Elena and Bram. The players finished in the same order as in round 1, but the gap between them was quite different.

Liza was first at around 6:15pm, just on the swap over between the second and third shifts. She had unleashed the power of the Grand Prix Attack on her opponent, who spent an hour pondering her response to a key attacking move. A good win!

Next to emerge was Marianne, at some time after 7pm, with her first points of the tournament. She was very pleased to have drawn, although this was tempered a little when she discovered that she could have won.

Marianne was pleased to get away from the venue, however. While the playing conditions were much better, she found the presence of a poster next to her table referencing Nazi war atrocities quite off-putting during the game.

That was the third shift over, and Andrew was left to wait for Zoe in the fourth and final shift.

As the sun went down and the mosquitoes came out, so did many of the players. The first time control came and went. But Zoe and her opponent were still in deep concentration.

Waiting for a further two hours for the game to finish – this is the loneliness of the long-distance chess parent!

To be honest, it was not all alone; David Shepherd, 16-year-old Katherine’s dad is far more used to this than I am and was indeed there even after Zoe and I left in the middle of a thunderstorm to get back before the dinner hall closed at 10pm.

After going through the (unfortunately lost) game with her coach, it was time for Zoe to go straight to bed.