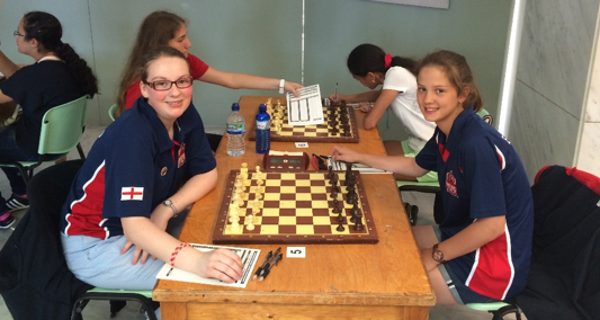 “Chess is mental torture” is what Garry Kasparov said in the context of his 1990s match vs Nigel Short. Those who play long competitive games of chess regularly will know what he meant. No wonder, then, that the players are getting very tired after the half-way point in this nine-round international tournament. While the weather is amazing, the hotel food good, and the location and participants list provide an exhilarating cross-cultural experience for the three girls, it is by no means simply a holiday for any of them.

In fact, with morning coaching and preparation and some long games into the evening, it is all too easy to overdo it. Mental state can be even more important at this stage of the tournament than at the beginning. Clearly that was a contributory factor for Liza in her round 6 defeat, after her previous loss to her team mate in round 5.

Zoe’s state of mind was also not the best approaching her game vs Marianne. She had not slept well as she was feeling physically sick at having to play the friend she had just spent her rest day relaxing with. On the surface, Marianne appeared a lot more relaxed about it, and joked as they sat down at the board “Bagsy White!”

The game between the two of them was over quite quickly, with mistakes on both sides. They were clearly both going for the win but, to your commentator, the nature of the game seemed more like a “friendly” than the others so far in the tournament. A point for Zoe was the result, but it could have gone either way earlier in the game. Afterwards Zoe and Marianne went through the game together with each of their coaches.