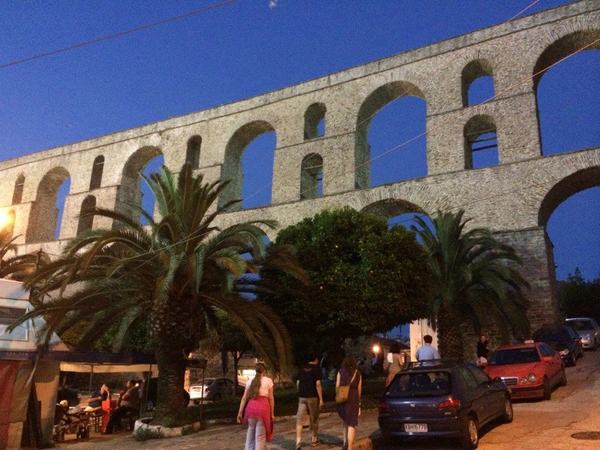 With their round 6 encounter now behind them, Zoe and Marianne prepared together before the next round. Just as on a chess board, it is often important not to overpush but instead to consolidate. Hence all the families were careful not to overdo it. After lunch Zoe simply relaxed reading, listening to some music and did some tidying up. Marianne spent her time not overdoing it by watching the football, and listening to music.

I will let Liza recount her relaxing experience in her own eloquent words. “Yesterday after a great coaching session we went up through the old city to get a break and some lovely photos of the sea views. We found a staircase leading through a cluster of beautiful flowering acacia trees down to the sea. The water there was amazingly clear but we were put off the idea of swimming by the colony of sea urchins which dwelled there. (However we are planning to go back there after we’ve bought some water shoes.) We spent a while sitting there in the sun on the slabs of rock trying to catch crabs and shrimps, however sadly all of our attempts failed and we decided to go back to the hotel for lunch and to do some more preparation.”

The games generally went well for the girls, except at the end for Marianne, who was the last out. Marianne found it hard to break through in a tight position, and then blundered because of time pressure, which was a shame as the game was heading towards a draw against an opponent who had previously beaten Zoe.

Zoe’s round 7 game went off the prepared line fairly quickly, but a tactical win of a piece in an already stronger position allowed her to win relatively quickly and easily. Elizaveta had a complicated game, in which she played with accurate judgement of the position bearing in mind her opponent’s playing style, enabling her to generate a strong attack using her central pawns.

I personally enjoyed sitting in on Liza’s after-game analysis with the coach as well as Zoe’s, learning a lot myself in the process. Bearing in mind that the games did not finish very late, it seemed strange that we were a bit later for dinner than the last few days, but that was due to the complications that we were examining in Liza’s game.

After dinner, Zoe and I joined Katherine Shepherd and her dad and most of the younger coaches to explore the old town at night. Quite an experience, with amazing views from the castle, atmospheric narrow winding streets, old ruins and lots of cats including at least one litter of kittens. Although we got to bed a bit later than intended, that would have been fine. Except for the football.

No-one could be in any doubt that Greece had won a key match in the World Cup at around 1am local time. The cacophony of bibbing horns, over-revved motorbike engines, loud music, drumming, raucous cheers, fireworks, etc, continued for more than half an hour as people paraded up and down the streets around the town.

Hopefully all the players were able to get back to sleep and it will not unduly affect their performance in round 8.