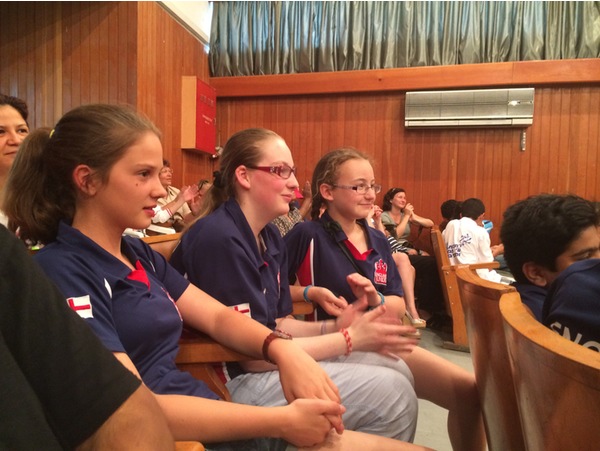 Towards the end of the tournament, Liza could be seen sporting a T-shirt with the words “Eat. Sleep. Chess.” But that does not mean it was a harsh regime. Liza’s view was summed up in the words for the last day’s report for the ECF website: “The routine we got in to – breakfast, preparation, coaching, rest, lunch, preparation, rest, game, dinner, rest and sleep – was so easy to follow and it wasn’t tiring.”

The end of the tournament involved a change to the schedule, since the last round (round 9) was due to start at 10.00am. With round 8 at the usual 4.00pm slot, this meant that by the time the pairings were published there was less time to prepare for the opponents in the final round. As well as potentially less sleep. Round 8 saw Zoe once again on the live boards against one of the stronger Russian players. The game was fairly level throughout, although interestingly in the post-game analysis it was clear that Zoe had seen much better moves for her opponent than were played!

After a long game, with both players tired, a draw was agreed when Zoe played some accurate moves in the rook and pawn end game to gain a small advantage as White.

Marianne and Liza were out earlier, both unfortunately losing their games. It was fairly late that Zoe got to bed after analysing the game and just getting to the dining room in time for dinner.

The hotel breakfast room was packed on the final morning, with everyone needing to get going earlier in order to make the 10.00am round start. Liza and Zoe shared the same coach (Neil McDonald) and Liza had chosen the earliest slot, 7.00am! Zoe also somehow managed to get up to take over Neil’s time at 7.40am. Marianne’s coach had arranged things a little differently. She had an hour long session, shared with Asha Jina, which made it a fun session as they worked off each other.

In this final round, Zoe was playing for a medal place (i.e. to be one of the top 6 in her section). A win would guarantee a place, a draw probably, but a loss was unlikely to do so, although theoretically possible if one of the other games went against the run of the previous results in the tournament.

Liza was the first out, achieving a longed-for win to finish the tournament with. Marianne had a much longer round, playing against highest seed among the U15 girls. Marianne eventually lost, but she had managed to hold on for another 40 moves after dropping a piece to a clever fork in the early stages of the middle game.

Zoe was out not much later than Liza, before Marianne. She had been playing a tough game on the live boards again. We have a father and daughter agreement that I do not watch Zoe’s games when she is playing “live.”

However, I had an indication of the impending finish just before the 3-hour mark when I received a text message from a friend who was watching. The message stated “In general she has played very well today but … oh no, that b4 move was so rash!”

Indeed, the “that b4 move” did turn out to be the turning point in the game which she lost. In the analysis room afterwards, Zoe’s coach did find a way to get some tricky counter-play at a later critical part of the game a few moves before she finally resigned. However, it took maybe 15 minutes of looking and by that stage of the game, the girls only had a few minutes each left on the clock.

We were still in the analysis room a little later when Zoe suddenly whooped for joy and gave me a big hug. The unthinkable had happened – there was a surprise result from a game between two Turks in the U15 girls section, which meant that Zoe was sixth place. Going up to the stage to collect a medal was one of the highlights of the whole experience for Zoe, although the book prize could have been better chosen – “Chess Tactics for Beginners” with mostly one-move mates is hardly appropriate for this level of competition!

Andrew is an ECF-accredited chess coach and very active in coaching juniors in the Oxfordshire area on a professional basis. He attends Cumnor Chess Club when he gets a chance to take a break from coaching on Thursday nights. One of the books he recommends to his students is ‘How to Beat Your Dad at Chess’ but his own children are definitely beyond the point of needing such a reference!

We are currently closed until further notice due to Coronavirus.