Liam GlennPosted on December 2, 2014 Posted in Chess No Comments 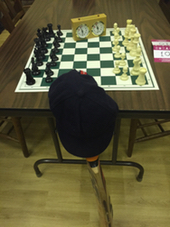 The 2014 Cowley Christmas Blitz was held on Monday 1 December and attracted a total of 48 players.

A closely contested blitz chess tournament was eventually won by Mark Hannon of Witney Chess Club with 8.5 out of 10, half a point ahead of Phil Hayward (Oxford City), Graham McInnes (Didcot), and Cowley’s own Will Burt.

Cumnor Chess Club was well represented with 8 players, 5 of which got a prize! Some of the prize winners are below and a full list can be found on Cowley Chess Club’s website.

A list of some of the prizewinners and their scores is as follows:

The coincidence of having several entrants graded 147 (and with the UK Snooker Championships currently taking place) prompted Controller Tim Dickinson to award a special ‘Best 147’ prize!

Liam has been coming to Cumnor Chess Club since he was wearing short trousers and now captains the first team. His interests include Chess, Oxford United, Chess and Chess. He shows you can be handsome and good at Chess.

We are currently closed until further notice due to Coronavirus.