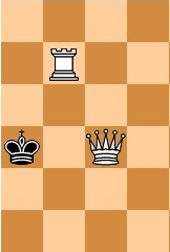 Cowley currently has two teams (Cowley 4 and Cowley 5) in division four of the Oxfordshire chess league, and on this occasion Cumnor was facing the stronger of the two sides.

I’m delighted to report that Cumnor 2 was victorious, winning the match 2-4. Huzzah!

Pako’s game on the top board was the last to finish, and saw Cumnor’s Latin American legend giving spectators palpitations as time rapidly ran out on both his and his opponent’s clock.

Pako managed to win his opponent’s rook, and after promoting a pawn to a Queen and mopping up all of Black’s pieces it looked like the win was a formality.

After all – how could a rook and queen fail to win against a solo king?

But sadly for Pako – hit by serious time trouble, sometimes knocking over his pieces (and his chair!) – he ran out of time on the clock with a forced mate just a move or two away.

Without sufficient ammo on Black’s side to indicate a win against Pako was possible, the game was declared a draw.

Here is my (Graham’s) game against John Taylor on board 2:

Well done to all who played last night – it was a great match.