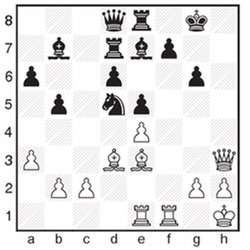 Perhaps non-players don’t always believe us, but most chess fans would find it hard to deny that Chess is a beautiful game.

Although games can last for hours, and it can feel – to those who aren’t gripped by a position’s nuances – that it would be more entertaining to watch paint dry, there is often more drama and action on a chess board than you would ever see on a football field.

Although every game starts the same way – 16 pieces versus 16 pieces, all in their traditional starting positions – the virtually limitless possibilities mean that we never quite know what we’re going to get.

The first chess match to receive the title of “The Immortal Game” was played in London, in June 1851, between Adolf Anderssen and Lionel Kieseritzky. And it’s hard to think of a chess game more exciting – with bold, dramatic sacrifices leading to a stunning checkmate.

You can view the game (via a rather nifty animated GIF) to the right of this article.

And earlier this month, a brand new chess game was touted as an “Immortal Game”, and perhaps one of the greatest games of the 21st century.

The stunning game was played by 16-year-old chess phenomenon Wei Yi versus Cuba’s Lazaro Bruzon Bautista at a recent tournament.

And like Adolf Anderssen, Wei Yei proves he has no problem making dramatic sacrifices to gain an advantage and lead his opponent’s king into a mating trap.

As “Ginger GM” Simon Williams explains in the following video, what’s impressive is not just that White saw the rook sacrifice on F7 (which probably many would have viewed as an interesting line), but that Wei Yei appears to have pieced together the rest of the jigsaw and seen that a checkmate was up for grabs umpteen moves later.

Is it right to call the Wui Yei / Lazaro Bruzon Bautista a classic “immortal” game? I don’t know. But it’s darn impressive, and beautiful to watch.