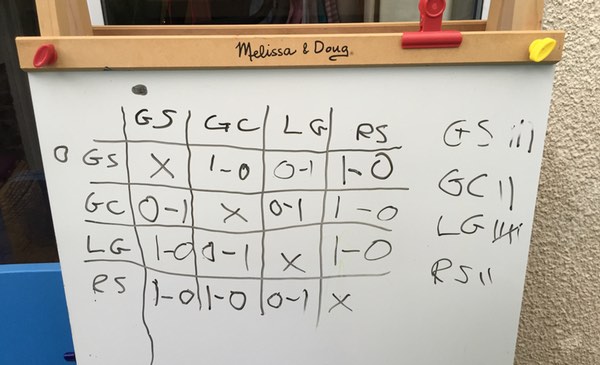 Cumnor Chess Club might be closed for August, but that isn’t stopping some of our players from getting their fix.

Last night, Cumnor saw its first ever “Cold Turkey Chess Tournament”, where four Cumnor Chess Club regulars were driven by their withdrawal symptoms to get together at one of their homes, and have a mini-tournament.

Everyone played each other twice, with 15 minutes on each clock. Play commenced in the back garden, with Liam Glenn taking an early lead ahead of Gareth Stevens, Richard Slade and Graham Cluley.

But man cannot live by chess alone. Fortunately, Mrs Cluley provided copious amounts of food (chicken curry, rather than cold turkey) and some beer may have been consumed while there was a lengthy discussion about James Bond movies and the revelation (to some of us) that dinosaurs had feathers.

Recommencing play, Liam’s lead became unassailable – losing only a single game (to Graham in the final round).

For the benefit of historians, we recorded the match results (but not the moves) on a high tech electronic scoreboard. Next week we plan to meet again for another cold turkey tournament. Let us know if you’re having withdrawals from Cumnor Chess Club too, and maybe you can come along? Alternatively, see you back in the club in September!