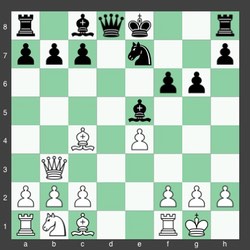 Cumnor 1 kicked off its season in style last night, beating Wantage 1 an impressive 6-0.

First to finish, in an impressively rapid 15 minutes or so (and just 12 moves) was Cumnor’s Daniel Varney, playing white against Peter Hemmings.

Here’s the board just before Daniel played the move that forced Peter to resign. Can you see the two different ways that White can force checkmate in two moves? If you said Bf7+, congratulations. Depending on where the Black king moves to, White can finish the game with Bh6++ or Qe6++.

The rest of the games took a lot longer than that, and in later analysis at The Bear and Ragged Staff demonstrated it became clear that the 6-0 result didn’t tell the whole story, and that in fact Wantage 1 had not only put up a tough fight, but was also seemingly winning on a number of boards.

However, temporarily at least, Cumnor is leading Division 2. Now the only challenge is… how can we stay there?