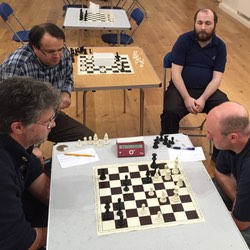 Before the match, Liam showed a few Cumnor players the extraordinary 12-move win that Daniel Varney had had against Peter Hemmings from Wantage the week before. Frankly, we’re all grateful that Daniel plays for Cumnor rather than against us!

Sadly, last night Bicester weren’t able to deliver the full compliment of six players, meaning that the bottom board saw no action and a game was defaulted. But don’t let that fool you into thinking that Cumnor 2 had an easy ride of it.

There was tough opposition on all boards, with Bicester 2 seeming to have the advantage in a number of games giving many of us on the Cumnor side the heebie-jeebies that the match would be lost.

In the end though, some precise play saw Robert gain an advantage over his opponent, Alan go on a killing-spree grabbing his opponent’s pieces here, there and everywhere, and Robin trick his opponent into moving her Queen into a trap.

Meanwhile, a tense game on the top board saw Mark Sayers eventually draw, making the final score 4.5-1.5 to Cumnor. Could Mark have won his game? Well, consider the following position with Mark as Black to move. Can you spot the mate? Warning: It’s not at all easy!

Oh, and if you did work it out, we’d definitely like you to join Cumnor Chess Club! Why not come along one Thursday night?