So last night chess returned to Cumnor Old School for the first time in over 18 months!

It was so nice to welcome Didcot 1 for one of the opening matches of the 21-22 season, and just great both to see so many familiar faces after all this time and to welcome a new one or two into the fold. COVID of course meant we had to be careful about a few things like keeping socially distanced where possible and having the Old School’s windows open in late September, but all in all it didn’t intrude too much into an enjoyable evening. 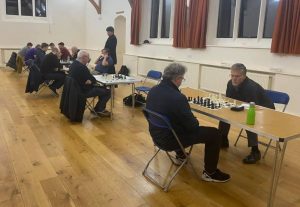 As for the games Stuart was first to finish. He dropped a pawn to Andy early in the opening, only for Andy to return the compliment with interest, losing a knight to a queen fork. It was over soon after that once Stuart activated his pieces, 1-0 Cumnor.

I (Ian) was next. I had a bit of an advantage out of the opening – more space; a bit of an initiative; a little bit of pressure down the d file; more active pieces. Basically while I had no game winning threats white’s position was easier to play than black’s. Florian worked hard to activate his pieces, but as is typical in such position he got a bit too optimistic, which lead to dropping a knight, and soon after the game. 2-0 Cumnor.

Eldar was playing a fascinating game on board 1 against Nick Gough, a heavyweight clash indeed! Eldar on the black side of an Advance French had grabbed white’s pawn on d4 with his queen, so while a pawn up his queen had very few squares and it would have been so easy to let it get trapped. One position I remember distinctly. On first glance Be3 won the queen, but on looking harder back rank threats saved it – all very complicated! Anyway Eldar navigated all the problems, and as is his way won with the extra pawn. In fact Eldar has previous here, winning a very high quality game in the same line against Dave Hackett in 17-18 4NCL, see below for the game.

So Cumnor were 3-0 up, and couldn’t lose. but the other 3 boards were far from foregone conclusions. Simon’s game on board 5 against Gary Reynolds was interesting. Gary as white had mangled his pawn structure with doubled, isolated h pawns to gain pressure down the open g file against a backward pawn on g7. On going through some of the game afterwards Simon and I demonstrated our different chess philosophies, I very much liked White because of the pressure, Simon preferred black because of the long term structural advantage. As is often the semi-conducting monster told us the truth was somewhere in between … Let’s say dynamic equality. After various excursions Simon lost in the endgame – I suspect as much because he was much lower on time as anything else. 3-1 to Cumnor.

I didn’t see the end of the other two games as I was going through Simon’s with him. On board 6 I thought Mark looked good early on, but his opponent managed to unravel his position and established a strong knight on e5 which Mark couldn’t kick away with a pawn. It went down to a Q+B endgame, which Tony won – 3-2 to Cumnor.

So it came down to board 3. The last time I saw Nigel’s game he was 2 pawns down in a N+P endgame. But, as is his way, he managed to swindle a win. Nigel, how do you keep doing this? A few lessons would be much appreciated. 4-2 to Cumnor! 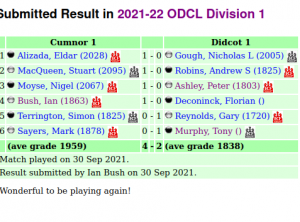 So a tough and exciting match – I think we just deserved to win it, but then again I’m biased. And with Cowley drawing at Banbury it leaves us top of the table!