Well for our second match in two weeks we welcomed City 1 to the Old School. With all due respect to Didcot, our previous week’s opponents, we expected it to be a much tougher match, partially because a few of our stronger players were not available, but mainly because City 1 in the before times were an extremely strong team, challenging University 1 for the title, while we are but newcomers to the top table. But we live in strange times, so while City had two very strong players on the top boards in Jon Manley and Phil Hayward, lower down there were a lot of new faces – great for the OCA, great for chess, but this also meant the match was going to be much tighter than we expected.

As in the previous report I’ll go through the boards in (roughly) the order they finished. Mark finished first, and to be honest I missed the vital phase. At one point it all looked fairly equal, a moderately complex queen-less middle game, at the next Mark had powerful rooks on the semi-open b and c files blasting away at the queen side castled white king, supported by his white squared bishop on f5. It looked to me that white was in all sorts of trouble, especially on the white squares, and so it proved – the next time I looked Mark was a rook up. 1-0 to Cumnor.

For the second time in two weeks I was second to finish. William played the Grand Prix Attack against my Pirc/Modern, but I managed to force the exchange of his white squared bishop – I had learnt after a few bloody noses from Joe in the Cumnor Clash that this makes white’s attack a lot less powerful. Anyway it sort of transposed into a strange Sicilian Dragon, and when William tried to attack he over-pressed and dropped a pawn. And then in trying to win back the pawn he ran into a nasty pin that bagged me a knight. After that it was a little bit one way traffic, and after struggling for a bit William resigned. Cumnor 2 City 0.

Tony and Liam finished more or less at the same time. Tony handled Tamal’s attack from a Stonewall structure very nicely – while the pressure down the g file looked nasty and sacrifices were very much in the air Tony realised that he could just calmly run his king to the centre, leaving the attack dissipated and White in a better position. And a pawn up, which became a piece as Tamal struggled to stop that extra pawn queening. And again there was a bit of a struggle after that, but soon Tony recorded his debut win for Cumnor, well played! Cumnor 3-0 and couldn’t lose the match.

Liam’s was like mine a Grand Prix Attack, but against a Sicilian rather than the Pirc, and Liam was white. And interestingly, at least for me, it resulted in a “Symmetric Benoni” structure:

The reason I mention this is I am currently studying “Chess Structures – A Grandmaster Guide” by GM Mauricio Flores Rios, 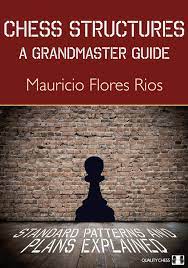 and the next chapter I’m going to read is on the “Symmetric Benoni”, so let’s see how it applies to Liam’s game. The position at move 21 is

Now GM Rios says in his book “… White usually retains a small spatial advantage. This a advantage increases if White manages to expand on the kingside, restricting Black’s pieces substantially. Black’s play can be rather difficult, and great precision is required to avoid being asphyxiated. A main theme in this variation is whether Black manages to trade off some minor pieces to decrease his space problem. In addition, the control of the e4-square is often an important factor to determine whether Black can equalize or not”. So how is Joseph doing currently? Not bad must be the assessment, he’s swapped off a couple of minor pieces, and he’s got some control of e4, and while White has started to expand on the King side nothing too much has been achieved yet, though g4 looks as though it is coming soon. And Mr Stockfish puts it about equal, maybe a small advantage to black but it is minuscule. “But, but, but what about that knight on d4? Doesn’t black have to deal with that now?” we all cry. NO! 21 cxd4 Qxd4+ drops at least one pawn, so black does have time to ignore this “threat”. Thus, given what is said above, 21 … h5! is the move. It holds blacks position together by stopping g4, so keeping pressure on e4, and incidentally threatening the somewhat embarrassing Bg4. Instead Joseph played 21 … Bxd3?!, arguably the losing move as it loses control of e4 and g4, and so white can be expected to expand on the king side. See how Liam takes it from that point:

Yup, squeezed to death. These GM’s know what they are on about … 4-0 Cumnor.

This left the top two boards. Phil had played the Dutch as is his want against Gareth’s 1 d4?. I don’t understand the Dutch. It always seems to me that black has no space and the pieces aren’t working, and then black wins by crashing through on the kings side. To me it looked like Gareth was a bit better early on having a bit more space and better pieces, but Phil is a good player, and slowly worked his way into the game, and guess what – eventually his attack crashed through on the king side. 4-1 Cumnor.

I don’t understand the Dutch. But I do understand the Pirc, and the last game to finish, the top board clash between Jon and Nigel, showed a fascinating example of what can occur. It’s also very much an example of what *not* to show the kids, at least when it comes to teaching them about development and the opening in chess … Here’s the game:

So what’s happening? Black seems to make weaknesses preparing Bg7, then never plays it and instead makes lots of pawn moves – look at the position at move 10. How can this be sound? This isn’t what we were taught! The point is after 5 Qd2 Black knows white’s plan – Bh6, swap, 0-0-0, h4 h5, sac, sac, mate. So if this is the plan why castle king side into the attack? In fact why even play Bg7 if white is just going to swap the bishop off? You can play Bxh6 just as well from f8 as g7. So the idea in not playing Bg7 and 0-0 is to save a move or two to further plans elsewhere, in particular on the queen side. If Black can make enough noise over there white might chicken out of queen side castling, and if white does that the sac, sac, mate plan doesn’t work.

So this is the point – Nigel’s queen side demonstration eventually makes Jon decide to castle king side, at which point the hack attack down the h file is no longer on and now Nigel can decide how to place his king in safety, which, complete with a nice sidestep, he achieves by marching it to the queen side. At which point Black has his own king side chances, but he has to keep an eye on white’s sacrificial ideas like Nxd6 or Nxc5.

So a nicely complex game between two very good players, ending in an honourable draw when both were running a bit short on time. So in the end Cumnor 4 1/2 – City 1 1/2: 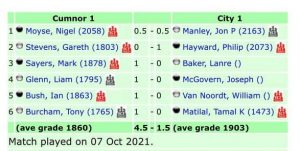 Top of the table a while yet!