Last night we welcomed University 1 to the Old School – possibly the first time this has ever occurred given our recent promotion to the top tier. Of course we expected this to be a tough match, University 1 have been winning everything for a number of years now, but when the first of their players arrived it turned out we may have a glimmer of a chance – a number of their strongest players were busy over the weekend so could not play. That said when the rest of the team arrived while it was true that it was not as strong as we feared we were still somewhat outrated, especially on the top boards. This was not going to be easy!

I say “when the rest of the team arrived” that in itself was a bit of an story. I won’t name names but a couple of their players missed the Cumnor bus stop and ended up at the Greyhound in Wooton. A rescue car was sent out and they started their games about 20 minutes late. We didn’t even start their clocks – maybe we’re too nice …

Partially because I don’t have a long train journey today, partially because I didn’t see too much of the other games this week (I was trying to dig myself out of the mess I made of the opening) this weeks report will be much shorter than last time, and so apologies for the lack of deep, laser like analysis of the intricacies of all the games :)

Nigel was first to finish, losing to Filip Mihov. No shame there, Filip’s record in OCA competitions is remarkable, 24/26 in the now 3 seasons he has been playing. It was a Kings Indian but Nigel’s king side play just didn’t seem to kick off, while in next to no time Filip had lots of open lines on the queen side. Cumnor 0 University 1.

Gareth was next. Gareth grabbed his opponents Queen Knights pawn. It was poisoned, a nice line closing combo won a piece for his opponent and it was always going to be difficult from then on. Cumnor 0 University 2

Mark was next, but for reasons I’ll explain below yet again I didn’t see the important part of his game. Mark was on the white side of an advance French, and while very early on Chris seemed to be doing nicely against Mark’s centre as the game progressed Mark’s position seemed to get better and I was very hopeful. Then the next thing I know is Mark had lost – apparently dropping a piece in a winning position. Bad luck Mark, we’ve all been there. Cumnor 0 University 3

The next few games all finished fairly quickly. The first was mine against Max, about 10 minutes after Mark’s finished, and the time scramble was why I missed much of his and the other games from this point. I’d misplayed the opening dropping a pawn, but had managed to make enough of a mess that I was back in the game. Both of us made mistakes in ever increasing time pressure, until right at then end we repeated moves. In a position where I had a winning combination … I’ve put the position below, try to solve it in less than 15 seconds with a clock ticking against you. But that was the match gone, Cumnor 0.5 University 3.5

White to play and win

I missed the majority of the last two boards. All I’ll say is both our unbeaten guest star Tony and Liam looked pretty comfortable in their games, Liam in particular having nice pressure against his opponents weakened pawn structure. Anyway the important bits happened while I was scrambling against Max, and both in our favour. 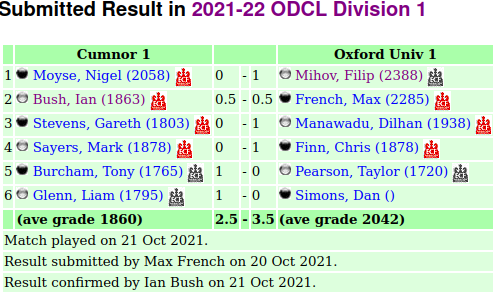 Rather than looking on the missed chances I think we can be pretty pleased – we expected nothing from this match, and somewhat out gunned we gave them a real run for their money.

Still top of the table!

Witney 1 is next week, a top 2 clash, another tough match.