Another Thursday, another match at the Old School! Starting the season with 4 home matches is a little unusual, but so it is and as such last night we welcomed Witney 1. Like City 1 in the before times Witney 1 were an extremely strong team, one of the three team “league within a league” that with University 1 regularly fought for the Division 1 title. But, as I’ve said before, we live in strange times and we wondered who would turn up to face us.

In the end it was a set of familiar faces but lacking one or two of the superstars that Witney can turn out – with all due respect to Mike Truran not seeing Marcus Harvey FM on top board was a bit of a relief! In fact the two teams were incredibly evenly matched, with just a few points difference in the average rating:

So while we were a little out-rated on the top boards, we were just favourites on the bottom 3 – but on all boards both players could be expected to have real chances.

So at 7.30 pm we kicked off with 1 d4? played on all 6 boards (“O tempora! O mores!” to quote the philosopher Cicero) and perhaps, given the similarity of strengths, unsurprisingly it was over 2 hours before a game finished – and thankfully the electric heaters more or less filled in for the broken central heating in the hall. In fact I was the first to finish. Danny played a quiet line against my Modern Benoni, quickly swapping down to a late middlegame where both players had R+R+N+N+7 pawns, and offered a draw. I declined, thinking myself marginally better, and we played on. And then I over pushed. I saw a forcing line that I thought won me a pawn, but to my horror realised half way through I had missed a knight fork on f6 at the end. I managed to limit the material damage to a pawn, but what a pawn, a passed one on d5, soon to reach d6. Luckily for me Danny missed a couple of opportunities at this point and I managed to exchange down to a double rook endgame just a pawn down with crucially a bit more activity for me – which was soon drawn after I managed to establish both rooks on his second rank. Cumnor 0.5 Witney 0.5

Next to finish were Mike and Stuart on top board in a very classical looking Queens Gambit. Mike lined has pieces up against Stuart’s king side and while I had little time to think about it at certain points it looked like a sac on g6 might open up the black king, but nothing quite worked and Stuart held it all together very nicely. I particularly liked

where Stuart coolly played h4 which keeps lines nicely closed; though it looks simple you have to carefully work through white’s attacking options before playing it. Anyway as the game progressed Stuart repulsed the attack and started to have his own opportunities, but with no obvious way through a draw was agreed. Cumnor 1 Witney 1

Gareth against Alan was another game where Witney seemed to have some pressure, but the Cumnor player managed to repulse the attack, and in this case push through to win very nicely. Gareth’s method was plenty good enough, but can you spot the short cut he missed in the position below?

White to play and win

The whole game was

Gareth and I then discussed the remaining boards in the club room – as Gareth put it 3 draws to win the match but it was far from clear to me, Eldar needed to hold a difficult ending, Mark looked worse to me against Howard, but on other hand I thought Tony had a few winning chances. But when we went back in it was all over!

I don’t actually know the order in which the games finished, so let’s look at Eldar’s first. As white he had misplayed the opening slightly against Dave Hackett, losing a number of tempi. Now there are openings where this doesn’t matter, but unfortunately this was the Taimanov variation of the Modern Benoni, a.k.a. the Flick-knife attack i.e. the sharpest line of one of the most sharp openings. Losing a tempo, even as white, is not good news here! What happened was that Eldar played a5 to stop Black’s queen side expansion, but unfortunately that failed to make room for his bishop when it was forced to retreat next move and it had to go to e2, which just got in the way of everything. As a result Dave gained a lot of time and early on Benoni-geddon seemed to be going on, the kind of position I dream of as black – look at the position after move 20:

The Q side pawns are marching, the black rooks are doubled on the half open e file, black pieces are working, while white’s are not, scattered more or less randomly across the back few rows. Further Black was very much up on the clock. But somehow Eldar held it all together, and with  21 … Nd3? the pressure started to lessen. Eventually it simplified into a still difficult R+N v. R+B endgame – even now his pieces were not working that well and were a bit awkwardly placed. But held it Eldar did, a tremendous defensive display – and bloody knackering I bet as well! The game is below, and this made it Cumnor 2.5 Witney 1.5

Tony’s game allows another episode in the occasional series “Ian Bush witters on about Pawn Structures.” Tony played 1 d4 for about the first time in 3 years – The English is his usual poison, but knowing that that’s Derek’s favoured opening he decided to avoid it, and ended up playing a very unusual variation of the Benko which transmogrified into something like a Kings Indian where black has used c5 as the primary pawn break. Anyway at his move 14 Derek started to change the pawn structure with 14 … e6:

When the pawn structure changes it’s always a good idea to stop and think. Here there are 3 main possibilities

I think we can dismiss 3) as clearly inferior. Black gets the hope of counter play with his passed c pawn and maybe pressure down the e file, and further I well know that in Asymmetric Benoni structures the white squared bishop can just get in the way, so White having the two bishops is not a big issue. But which out of 1) and 2)?

Well 1) is definitely a good option. Black is going to get a glaring weakness on d6, and white can get at it through a knight on b5 and down the d-file. Black can’t really stop the former by a6 due to the weaknesses it creates on the Q side, and stopping the latter by blocking with a minor piece on d4 is not possible, white will just swap it off. So Black has to play for d6-d5 which will either lead to an opening of the position where white has the two bishops, and more space, and a weakened K side and c pawn to aim at, or, after e5, white establishing a monstrous knight on d6. I know who I prefer. Picking a sample line using Stockfish’s preferred moves gives something like

It’s clear white has the easier game – and note d5 doesn’t work in much of this due to the e5 and Nd6 idea.

What about plan 2), the symmetric Benoni structure? Well we know all about this from Liam’s game against City 1. White wants to

This is in fact what Tony did, but didn’t quite find the best execution

Black has managed to get rid of a second minor piece, and should now play Bxb2 and he is fine – in fact Stockfish thinks slightly better. In the actual game Derek played 17 … Qd7 which is not so good blocking the knight re-routing to the king side, and Tony soon got an overwhelming position based on a quick f5 and opening the f file. And then … well I’ll spare Tony’s blushes.

White really wants to play 16 exd5 in the above, but can’t because of Ng4, planning an invasion on e3 and possibly a nasty check with the bishop from d4. So white is forced to swap off knights first. But this does suggest the right way to play the symmetric Benoni plan, 15 h3! to stop the knight coming into g4, and also giving a useful bit of luft after Bd4+. Following this leads to something like

where white has a nice attack, but arguably black has more counter-chances than in plan 1) above. Note also how the white queen bishop goes to d2 to avoid swapping pieces.

Which of the plans is better. Mr Stockfish puts them about the same – ultimately it’s a matter of taste, and I can see attractions in both. Anyway an interesting game, and as indicated above Tony got an excellent position but missed the win, Derek finding his equalising chance. So Cumnor 3 Witney 2.

That leaves Mark’s game. Howard played a London system. Mark used a Kings Indian type set up against it, but seemed to be under a little pressure most of the game, with Howard pressing against some weak pawns on the Queen side. Going into injury time it looked as though Howard was about to win his pawn and, well, I don’t have the score but the below gets the essence of position, what did Mark (Black) play at the end which resulted in Howard’s immediate resignation? Anyway final score Cumnor 4 Witney 2

So all in all a very tough match, which maybe we were a little lucky to win – certainly I feel I got away with murder and on another day other games could also have gone against us. But to quote the contemporary philosopher Dr. G. Lineker (Leicester) “They all count the same!” (https://twitter.com/garylineker/status/1261190324115910657) 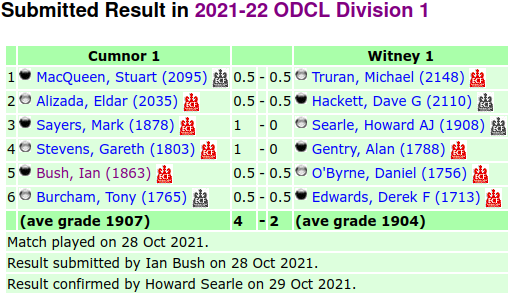 Still top of the table, but I suspect when University 1 visits Didcot on Monday that will be end of that – so let’s enjoy it while we can!