Well another Thursday, another match, but for the first time this season not at the Old School. Yes, Cumnor 1 were on the road, traveling to the northern edge of OCA-land at Banbury. Second verses third we thought this would be a tough one, and so it proved. We were a couple of players short of full strength while Banbury turned out a very strong side with James Jackson IM on board 1. If we were going to get anything out of this we would have to overturn an average rating difference of almost 200 points per board (about 25 in old money).

Also apologies for the briefness of this report, and for being a little late, work and then the 4NCL over the weekend have intruded on the more important business … I’ll just briefly go through the boards in order saying what I remember from last Thursday.

On top board Nigel dropped a pawn fairly early on, but got a bit of compensation in terms of pressure down the open c file. Play was interesting for a while, but it never looked like enough and indeed James pulled through to win.

On board two Gareth dropped a pawn fairly early on (you may notice a theme developing here) but got a bit of compensation with slightly more active pieces, but again it never looked enough and Georgs secured the win.

On board three I dropped a pawn fairly early on .. But at least this time it was deliberate! I played the Smith-Morra Gambit against Gary’s Sicilian defense. Gary played an unusual line, I went slightly on auto-pilot missing the best moves early on with routine play, and as much in frustration with myself then offered a piece to open up the king file before Gary had castled – a form of the Nd5 sac to all Sicilian aficionados out there. As soon as I moved I could see it was utter, utter rubbish, but I kept a poker face and had moved sufficiently quickly to persuade Gary I was still in book … Nett result he declined the knight and I got sufficient compensation for the pawn gambitted. An interesting game followed where I had pressure, especially down the d file against a backward pawn on d7 and chances of a k side attack, but Gary slowly freed his pieces until, when it was still probably more or less equal, I missed a tactic and dropped a piece. Well played Gary!

On board four Liam failed to drop a pawn early on. Against Dan’s 1 d4? a pretty symmetrical game resulted, with pieces fairly quickly swapped off into a king and lots of pawns ending, which was quickly agreed a draw.

On board five I think, but am not totally sure, Tony dropped a pawn fairly early on. Chris with his super-speed play developed some threats, but Tony found a nice bit of tactics to get out of it, simplifying down to an ending which again was quickly agreed to be a draw.

On board six our debutant Andrey, another player on loan from Bicester, showed his naivety at the first team level by failing to drop a pawn early on. Instead he played extremely well and probably had the better of a draw against Mal – certainly whenever I looked I thought he had marginally the better chances. It ended in a tricky knight and pawn ending which I certainly wouldn’t fancy playing from either side, but it was drawn after some inventive attempts from both black and white – Andrey forking Mal’s king and knight with his own knight in an effort to force a pawn through was particularly nice, unfortunately declining the sac defused the threat.

So 4.5-1.5 to the home team, given the strength difference I think a very respectable result for us: 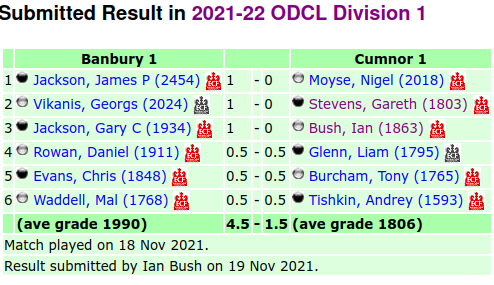 We drop to third

Still doing well – if you had told me after 5 matches that this would be the table I would have been utterly amazed!

Anyway last match of the first half of the season at home to Cowley on Thursday, let’s see if we can end a superb first half of 21-22 with another result!