Well last night as both Cumnor 1 and 2 had a break from the league and cup it was time to crack on with the internal club competitions – these are The Players Cup for members of the first team squad, and the Bill Laar Trophy, locally known as the BLT, for everybody else. Six games were played in total, 4 in the BLT, and 2 in the Players Cup.

In fact last night was Grand Prix night in the Players Cup, both games featured this aggressive set up for white which can be played against a number of black approaches – Liam used it against Nigel’s Sicilian and Tony against my Pirc/Modern, but it wasn’t a total success for the white side, Nigel winning and me having the better of a draw with Tony. After this Nigel is currently well ahead in the competition 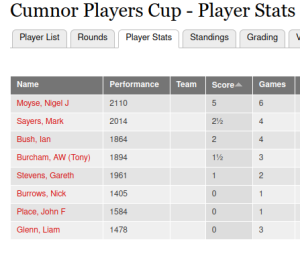 (the current score can be found on the ECF LMS) but is catchable, especially by Mark, the only person to take points off Nigel so far.

In the BLT Allan Evans won the battle of the Al(l)ans, newcomer Callum beat Pedro to take the overall lead in the competition, and Andrey won in his nice, tidy positional style, but game of the evening was the utter madness that erupted on the board between Jonathan and Robin – part driven by the short time control (45 minutes) no doubt as indeed Robin won on time, though he is better in the final position: 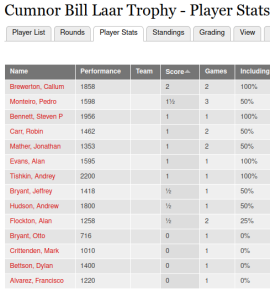 A long way to go in both competitions, they follow the calendar year rather than the league’s seasons, so much time for twists and turns – and games like Jonathan’s and Robin’s!

Ian has been playing for Cumnor Chess Club since 2017, having previously played for MCS Blackbirds. View all posts by Ian Bush

One thought on “Four BLTs at the Club”