Last Monday, the 21st March, saw the first team in action away at City 1, on Polstead Road in North Oxford We were weakened due to illness and the absence of a top player or two, but unfortunately so were City, their captain Phil Hayward having contracted the evil lurgee – Hope you are better now Phil! Nett result was that while we were somewhat outgraded it was not totally without hope, but we would probably need a bit of luck …

As usual I shall go through the games in more or less the order they finished.

Tony finished first. He is obviously learning from his time at Cumnor, as he dropped a pawn early on. And then to be honest I didn’t see what happened after that until he stood up having resigned. City 1 Cumnor 0

Another Bicester loanee, Andrey, was next. Andrey has been having a fantastic season at the top of the second team with a 100% record, helping drive them up to second place in division 3, and here he managed to notch up his first win for the first team – well done Andrey, in this form many more are to come! The game itself was interesting, a roller-coaster with both Andrey and Lanre having chances, with a wild first half and an instructive endgame for the second half. From the first half let’s pick one of many possibilities for our first tactical quiz, from very early on in the game. In the position below white has just played g3, what’s black’s best continuation in the given position?

Answers to the tactical quizzes are at the end.

Anyway the opening and middle game went as follows:

Amongst this madness there are some positional themes going on. Early on Andrey has noted white’s backward pawn on d2, and has made it his plan to attack it – note how he takes with the rook on move 14 rather than the pawn in order to leave the way to it open. Generally this is a good idea, try and leave lines to weaknesses open, though in this specific instance 14 … cxd3 does also look pretty good, the pawn on d3 more or less splitting white’s army in half.

All the above lead to an instructive endgame position where Andrey has a decision to make at move 35 (Yes, I know I’m going to start talking about endgames – d’Souza-Eva, Terrington, stop laughing at the back there!)

Should black take the rook and go into the pawn endgame? The possibility of an outside passed pawn for Black on the queen side is a plus, that is on the queen side black has a 2-1 majority which could be very dangerous in a pawn endgame, but the more immediate issue is that after the exchange of rooks White’s king will be much better centralized and active than Black’s, and for me this is the much more important observation – Andrey swapped off rooks, but I think he should try and activate his king first before he does this. Mr Stockfish and the game continuation seem to agree:

In the final position Black is in real trouble. If it were black’s move, and if he had to move his king he would lose very quickly – after something like Kd8 White can play Kc6 and eat all Black’s queen side pawns leading to a winning endgame. So all white has to do is move has pawns until black runs out of reasonable pawn moves and the black will have to move his king, so losing – The technical term is zugzwang, and this idea of forcing your opponent into  a position where if they could pass they would be OK, but having to move loses, is very common in endgames. A not unreasonable continuation following this theme might be

where white wins by advancing his a pawn, and while black is dealing with that the moving his king to the king side and eating black’s pawns there, and queening either the g or h pawn. Note especially the zugzwang after move 45. h5, where any move by black loses very quickly, but if he didn’t have to move he would be OK

Luckily (and it’s not the first time I will use this word) Andrey’s opponent didn’t spot the zugzwang possibility! I have a lot of sympathy for this, I find it very hard myself, and the game in fact continued

So in the end just one tempo in it, Andrey making contact with white’s king side pawns first was all it took to win. An interesting and instructive game, and I hope it shows that pawns endgames are both interesting and very difficult! And well done again Andrey on your win, the whole game was

Next to finish was me. To save embarrassment all round I won’t show the game, many apologies to Matt for the result, this went beyond luck. I will however report the exchange after the game

Matt: “I blundered and you spotted it. And I only spotted the trap in the opening because I found it about 2 years ago when somebody played the same line against me”

Aren’t we supposed to learn things? Anyway tactical quiz 2 is the little combination Matt found (twice!) against me:

I’d played (twice) Re1 last move to support e6 in response to the expected d6. Why is it not a very good plan, and in particular why is Bxe6 poor? Answer at the end, and somehow the game made it City 1 – Cumnor 2.

Liam was next, another roller coaster of a game where either side could have won, but again luckily it was Liam who made the second to last blunder, to misquote the learned Dr Tartakower. Here is most of the game, what is the nice move that Liam found that finishes it off rapidly at the end?

Amazingly it was now City 1 – Cumnor 3 and we couldn’t lose the match!

Soon after Mark finished on board 2. Outgraded he had been under the kosh most of the game, with Ross having strong pressure on the king side. To be honest I was amazed Mark had survived that long, but eventually the tightrope walking came to an end and Ross caught Mark’s king with his doubled rooks on the open h file against a king side castled king. City 2 – Cumnor 3

That left Nigel and Arya on top board. Nigel had thrown everything including the kitchen sink at Arya in a fantastic attacking game:

It might not all be amazingly sound, but defense is harder than attack, and holding it all together when the match depended upon it was a great display by Arya, it would have been so easy to go wrong – and well played Nigel, very entertaining stuff, and Liam and I kept spot perpetuals or better which on deeper thought went away, it was a great game on which to finish such a close match. 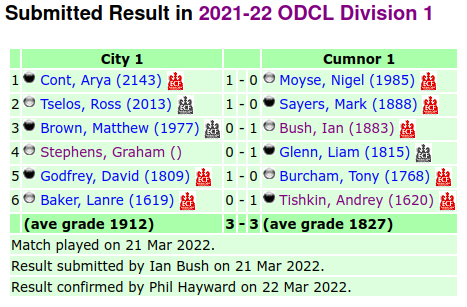 Next up the big mid-table derby against Banbury.

Answers to the tactical questions. As these are real games they are a bit more messy than normal tactical quizzes, but I’ll show the main lines. Firstly from Andrey’s game while dxc4 as played is pretty good Black can get a winning advantage by

This idea of a queen attacking a rook from the centre of the board after g3/g6 or similar comes up once in a while; it’s worth remembering.

when either White drops at least a pawn (the a1 rook drops in many lines), or (least bad) leaves his king almost completely open to attack (as I know very much to my cost).

Ian has been playing for Cumnor Chess Club since 2017, having previously played for MCS Blackbirds. View all posts by Ian Bush