I’ve got a bit behind on the match reports for Cumnor 1, unfortunately ill health has left me rather low in energy, but here is an attempt to catch up on the two matches that we’ve played. Unfortunately we lost both 5.5-0.5, but in fact the raw results hide two somewhat different stories. 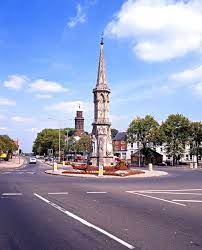 Firstly against Banbury 1, played a while ago on 31st March. Here the story is quite simple – Banbury were better than us. In fact when a team turns up with James Jackson IM on top board, and as good a player as Paul Rowan on board 6 you know you are going to be in for a tough night. Mark saved our blushes with a good draw against Georgs, but that was it as far as we were concerned: 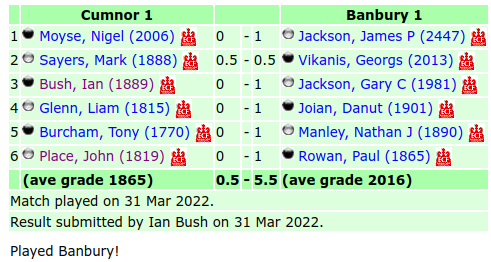 So simply we were outplayed, nothing to add save for the top boards being a night for the hypermodinists, featuring two Pircs and two Alekhine Defences. Well played Banbury!

On April 28th we went to Wadham College to face the Champions elect, University 1. 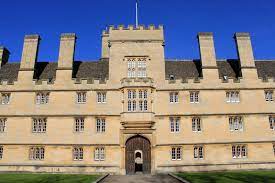 Despite again facing a titled player on top board and having a somewhat weakened team due to illness the match was much closer, and we can, I think, feel unlucky with the final score – a comment echoed by one of the University players as we left. Debutant Callum and Andrey both had excellent winning chances, as did Nigel against his FM opponent and Liam nearly held a draw, only for it to slip away in time trouble.

Nigel’s game was excellent, despite his loss here it is in full. Under a bit of pressure early on Nigel decided to sac a piece for two pawns for activity. This turned out to be an excellent decision, giving Tom the eventual choice of accepting a perpetual check or playing for a win by returning the material. Understandably Tom chose the latter, but Nigel was better through much of the rest of the game, only to make a tired looking blunder when time was getting short:

It was my turn to save the team’s blushes, scrambling a draw for the second time this season against Max French. The game went straight down one of the more important variations of the so-called “Modern Main Line” of the Modern Benoni. This is a line where rather than trying to smash Black off the board, White initially spends more time stopping Black’s counter play and setting up a solid position from which to grind an inactive black down. I avoid the main main line with 10 … Nh5, stopping Bf4, which while not as solid as an earlier b5, tends to leave Black less passive – the latter is not my style. After that I slightly misplayed the queen side, 18 … Bd7 is a definite improvement as indicated, and Max slowly built the pressure until like Nigel I sacced hoping for activity and specifically a perpetual check. Which is what happened, though as you will see not quite in the way I expected after Max missed a cheapo when we were both short on the clock!

In fact I missed a chance to get a significant advantage near the end (i.e. after move 40), this month’s tactical quiz – can you find it? Warning: Not at all trivial, especially with seconds left on the clock!

In fact I think with a weakened team we can be tremendously proud of giving them such a good match, on another day who knows?

Answer to the tactical quiz

The point is black doesn’t have to take the bishop at once, white has the queen en prise and has to deal with this, allowing black to grab a pawn and the much more important black squared bishop, as opposed to the white squared one. This leaves black a strong passed pawn up with the initiative in a Q+opposite squared bishop ending, both very useful advantages.