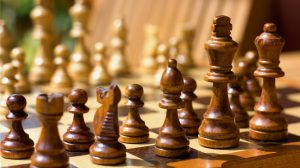 A Message from Steve

“The King is dead, long live the King.
Well, not literally, thankfully.

Liam has handed in his Cumnor 1 captaincy.

It was around 2002 when this quiet, very keen chess playing lad aged 12, joined the club. He was a pleasure to teach and to play against. Over the years his game grew stronger and stronger, and it wasn’t too long before he started to make me think, rather than I making him think. Liam, has been a steadfast part of our club for many many years.

By 2009 we had enough players to introduce a second team. I needed someone to Captain the new team. With Cunmor 1 in division 3, Cunmor 2 started in division 4. Liam, aged 19 took on the job of Cumnor 2 captain but by the 2011-12 season it was apparent that Liam had over taken me in rating points and became First Team captain.

Within ten years of hard slog he managed to get Cumnor 1 to win Division 2 in the 2018/19 season, promoting Cunmor 1 to Division 1 and winning the Frank Woods Shield too. An epic event for such a tiny club.

The C1 captaincy baton has now been passed onto our extremely capable and very efficient Ian Bush.
Many thanks Ian for excepting the position. The club is most grateful.

The second revised league fixtures are now posted on the OCA web site.

By the way, we had three new members show up at the club last Thursday.

Hope to see more of you over the coming weeks.”

A Message from Liam
“Thank you Steve, its been a pleasure. I still plan to be a semi-regular player for the team.”

I’m pleased to say that we’re running the Witney Online Rapidplay again this year. Details below:

No of rounds: Six.

Do please support us if you can!

So last tonight concluded our regular online Thursday evenings, and great fun they were.
For the past eighteen months we’ve been able to continue playing chess with each other. This of course was due to Graham Cluley building the platform at the start of the first lock-down in March 2020.

Thanks a million Graham, it was a god send.

Next week we shall reconvene once again at the club.
Thursday 9th September at 7pm.

The OCA 20/21 season commences during the last week of September. Only three divisions this season, as a number of clubs have reduced their teams.
Cumnor 1 remain in Division 1, and Cumnor 2 play in Division 3.

When we meet next Thursday can we please do the following:
Bring a mask, in case you wish, or your opponent wishes you to wear one.
Bring your own refreshments, and take any empties and waste home with you.
Sanitiser will be available. Please use the sanitiser prior to playing a game.

The club now has seventeen digital clocks, which is enough for match and club play during the same evening. The OCA 20/21 season requires digital clocks to be used only. We have therefore complied with this new ruling. The club will still have a few analog clocks on site should they be needed by anyone.

We looking forward to next Thursday, fingers crossed it will be permanent.

We are pleased to announce that the Club Nights will return on Thursday the 9th September 2021.

Its been a long time since we played an over the board game in the Old School House and talking to the regulars everyone is really looking forward to it.

The 2021-22 season will start in earnest at the end of September. This season there will only be three divisions instead of the usual four. Cumnor 1 will play in Division 1 and Cumnor 2 in Division 3.

If you have taken up Chess during the lockdown or watched the highly successful Queens Gambit on Netflix please come along. We have a friendly club and the first night is free so you have nothing to lose!

All the information for old and new members can be found in the About and New Members Section pages.

Some great news… Over the Board League Chess will be back in the Autumn with Cumnor 1 remaining in Division One while Cumnor 2 will join the combined Division Three and Four, which will from now on be called Division Three. All this is yet to be confirmed but it is exciting! Cumnor is currently planning to open the doors in September.

Responses from the clubs revealed that we had 22 teams plus two possibles for next year’s ODCL. Banbury could confirm only one team but may be able to raise two; Oxford Brookes would like to enter a team but will not know until September whether they have enough players. The Committee meeting held on 19 May decided to allow the clubs until 30 June to enter any further teams, after which the fixture list for the 2021-22 season will be set up.

When we abandoned the 2019-20 league we said that relegation and promotion would not apply. Applying this and eliminating the missing teams from the bottom upwards removes Banbury 3, Bicester 2, Cowley 5 and 6, Didcot 3 and Witney 4, leaving the divisional structure as 8-8-4-3. Combining the bottom two divisions and adding the possible new Brookes team to the new Division 3 gives the following.

This structure, agreed by the Committee, is provisional, depending on decisions from Banbury and Oxford Brookes. Unless an influx of extra teams allows us to revert to four divisions, rule- changes will be proposed at the AGM to reflect the new three- division structure. (The AGM date was set as Thu 16 Sep.)

All of this assumes that we will be able to return to OTB chess by October.

Sad news has reached us this morning, Ian Brooke has passed away, Ian writes below.

I have just received the very sad news of the death of Ian Brooke. Ian has been a stalwart of the OCA and the Oxford City club for more years than most can remember – a former Chair of the OCA, he ran the Oxfordshire open team, and was been Chairman of the Oxford City club for almost 30 years. He was also an active and more than useful participant (as I know to my cost!) into his nineties, playing right up to when Covid curtailed over the board chess when he won a prize at the last Kidlington tournament. He was also kind enough to go with me to tournaments in the West Country, and I know over the years he has done similar for many other players in the county.

I know many of us will miss him, especially his positive and generous character, and I am sure all our thoughts go to his family.

Following what seemed to be an enjoyable night of Chess in Feb we shall be rerunning the OCA Blitz @ Cowley event, this time on Thursday 8th April. Again Dave Robson of the Cowley club has very kindly allowed us to reuse what he set up. As for the Cowley Blitz there will be no admission fee, and there will be no prizes. However, we will recognize, and announce the names of those players who in different circumstances would have won the usual prizes for finishing first, second, third, or as best female player, best slow starter, etc., etc.

The blitz will start at 7:30 p.m. and finish at 9:30 p.m. Any games running after that time can be completed, but they will not contribute towards the final standings. To provide a bit of variety, this time we shall be using the slightly longer time control of 5 minutes for the game, plus an extra three seconds for every move you take.

Once you are a member of the Cowley Blitz team you enter as as follows: On the night of the tournament five or ten minutes before the tournament starts, click on the tournament link and then click on the green “Join” button which you can find just above the list of players who have already entered. At 7:30, the Lichess site will then pair you with your opponent, and the game will begin.

If you need to resign or to offer a draw, you must hit the relevant button twice. You can disable this behaviour in your Lichess profile.

At the end of your game, you will need to hit the labelled button to return to the tournament. Lichess will then pair you up with your next opponent.

The tournament is of an “arena” format, so there isn’t a fixed number of rounds. You can get more information at Arena Help. You can start the tournament late, or leave early, but the more games you play, the better the odds of you winning! Note that we have disabled “beserking” and extra points for winning streaks.

Have fun! For any questions, please email CowleyBlitz@gmail.com

You have only until Easter Monday to submit your best game of the season!

Well we’re coming to the end of season like no other and that means it’s time for the Award Ceremony. Lacking our usual structure what we can give out is limited, but we will hand out the Lester Millin trophy to the best junior, and we also intend to award the Ray Starkie trophy for the best game played in the two Mike Duck tournaments.

With regard to the latter Matt Rose has again kindly agreed to act as judge. So get your amazing brilliancies and subtle positional masterpieces to Roger Thetford via email in pgn format – You can contact Roger with the contacts link which you can find on the left hand side of the page, or via the link below. The deadline for submission is 5th April (Easter Monday), and the winner will be announced at the May committee meeting.