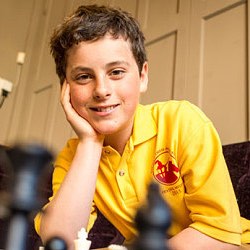 Well done to Dominic Miller, a promising 13-year-old chess player, who is already playing in the National Junior Chess squad.

Why are we congratulating Dominic? Well, he’s just won a £2000 scholarship to the prestigious independent school Brighton College.

According to The Telegraph, Dominic – who is based in East Preston, West Sussex – has a rapid play ECF grade of 154.

I’ll bet his family are proud, and his parents are pleased that he’s not only doing great at chess but is also going to save them a few farthings too…

However, Dominic isn’t the only young teen performing well across the chess board.

Cumnor Chess Club’s own 13-year-old Daniel Varney and his sister Zoe Varney, 14, currently have ECF rapid play grades of 148 and 164 respectively and are mainstays of Cumnor’s first team.

Although chess players are said to be past their peak once they reach their forties, a young age is clearly no barrier to giving us oldies a humiliating whupping.

Our hearty congratulations to Dominic, who you can read more about in The Telegraph.